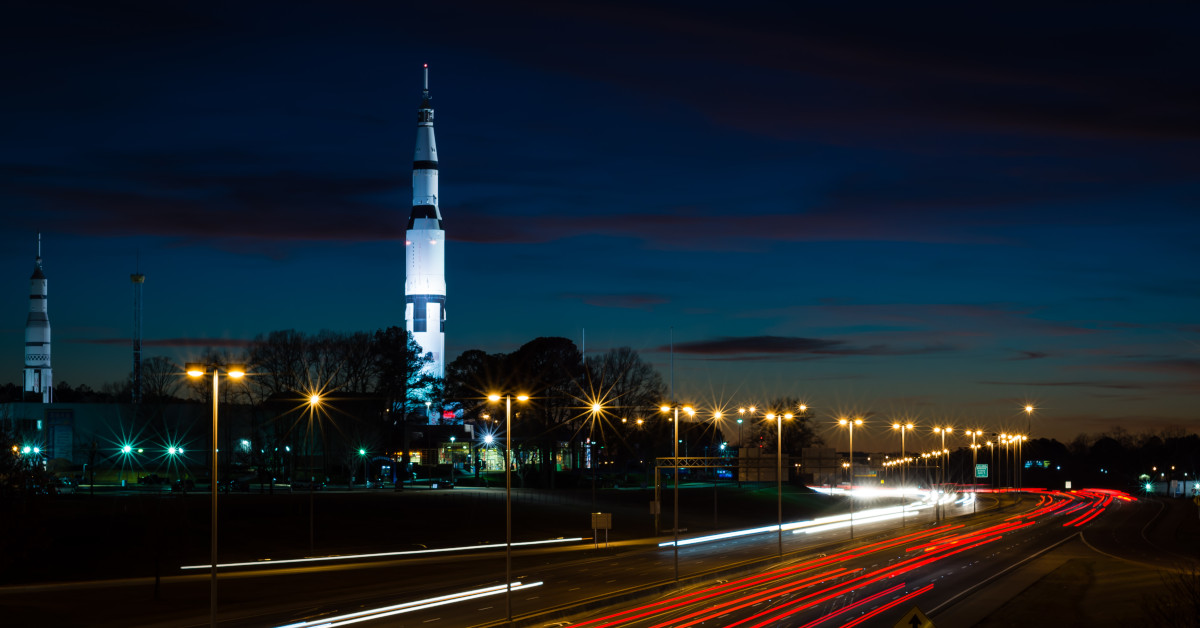 Our team should be intimately familiar with the three-hour stretch of I-65 between Prattville and Decatur, Alabama. They drove it four times in about as many days during a recent work trip.

The team had been on a troubleshooting assignment to a rocket-building NASA partner that needed help with what appeared to be failing sensors. They had no idea that what seemed like a fairly straightforward trip would soon become far more interesting and logistically challenging. One phone call later though, and they were dispatched 166 miles south to a paper mill client.

Upon arrival, they began commissioning new Acosense technology on the plant’s process lines. Integrated Test & Measurement is an exclusive U.S. installer of the Swedish technology that can constantly monitor and analyze liquids inside a pipe with non-invasive clamp-on sensors.

The small crew proved themselves both flexible and adaptable by pulling double duty as they served both clients for the better part of a week. Rocket work one day. Back in the car. Paper mill the next. Back in the car. And so on until both jobs were complete. The week could serve as a microcosm of the variety of work ITM engineers balance regularly.

“That was a challenging week for this crew for sure,” said ITM President Tim Carlier. “But it was all interesting technology and gave the team a chance to troubleshoot newer equipment. So it was a good learning challenge for us and an example of our dedication to meet the needs of our clients.”

ITM engineers and technicians experience a wide variety of projects and travel opportunities. For some, the real joy is working with their hands on site, while others prefer the more technical activities such as computer assisted design or relying on their social skills during customer interactions.

Ultimately, we do what it takes to deliver — even when that means burning up the roads in Alabama to get the job done.

For more information about our strain gauging and testing services contact Ryan Welker @ (844) 837-8797.

The team at ITM spent half a day at the University of Cincinnati recently in an effort to invest in the next generation of engineers.

A few of the projects they judged included a Mars Rover prototype, a homemade emergency rescue drone and an autonomous object avoidance system that uses lidar technology to prevent crashes.

As a whole, ITM’s crew left campus feeling encouraged by the impressive engineering skills, presentation styles and ingenuity of UC’s students. For Carlier, a day like this is an opportunity to connect with young people entering the industry. While he is always on the lookout for potential co-op connections or to recruit talented employees, building relationships and supporting young engineers is the main objective.

“These guys and gals are going to be out in the workforce, and they will have jobs that could use our services someday,” said Carlier. “It is exciting to see how well they are doing.”

For Fishback and Petzinger, both UC alumni and former track and field athletes, it was a chance to return to their alma mater.

“It is always good to come back and see how UC has progressed,” said Fishback, an accountant who graduated from UC’s Lindner College of Business. “I like seeing how the students carry themselves and how they present their senior design projects. I was pretty impressed.”

Petzinger was excited to see his favorite professor’s name — Thomas Mantei — had been added to UC’s Engineering Research Center. He also found it helpful to learn what types of programming languages today’s students are favoring.

“They are doing a lot more web-based machine learning now than when I was on campus,” said Petzinger. “It is pretty interesting to see the direction things are going. They knew their stuff. I didn’t have a single student stumble over a technical question that I gave them.”

Carlier handed out business cards to those he engaged with and invited them to connect on LinkedIn so he could follow their career achievements.

For more information about Engineering or CO-OP positions at ITM contact Josh Fishback via email at josh.fishback@itestsystem.com or phone at (844) 837-8797 x705. 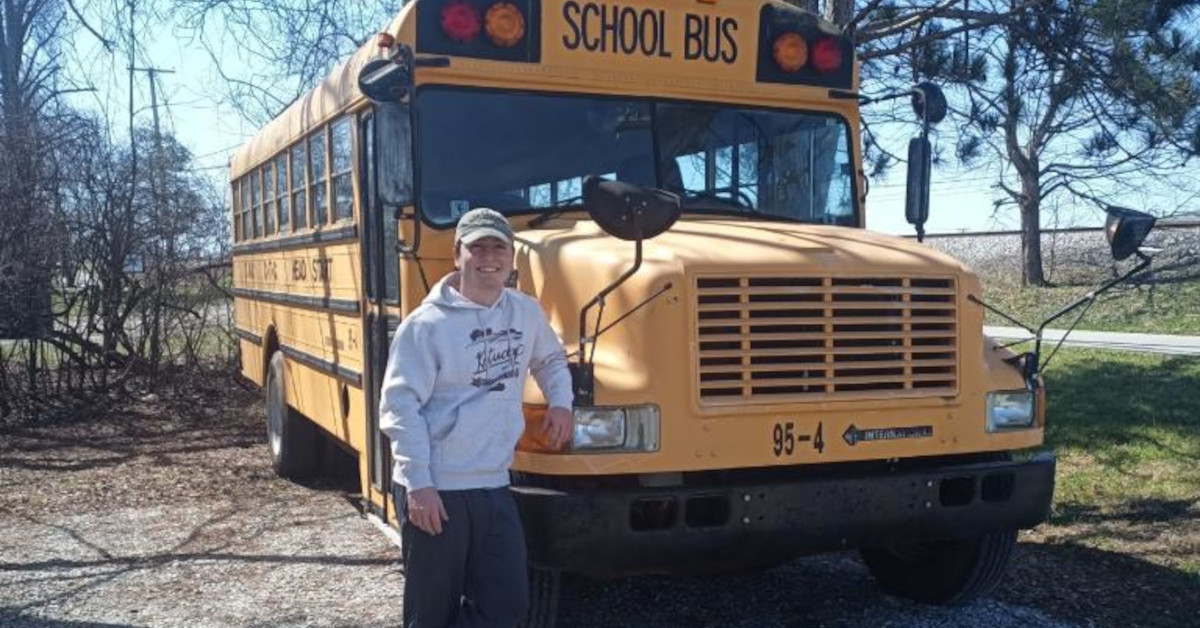 Weston Graham found a whole lot more than valuable job experience while co-oping at Integrated Test & Measurement (ITM). He also found his dream home — a 7-ton bus he would convert into a tiny house on wheels.

The University of Cincinnati aerospace engineering major had joined ITM on a NASA contract testing rocket components in Huntsville, Alabama, when a Facebook Marketplace search unearthed the ideal fixer-upper, a 1995 8-window International bus in his price range.

After all, Weston had the mechanical aptitude. Having spent his formative years tearing apart and selling enough go-karts to buy his first car, why not go big? Really big. Only problem was the bus he desired sat 3.5 hours away from his Huntsville hotel room. He talked a coworker into a midnight run through Alabama and eventually parked the bus in his parents Louisville, Kentucky driveway.

“It is the only school bus ever produced with a mechanical DT466 engine,” he fawned. “It is a wet-sleeve design, so you can actually change out the cylinders and rebuild the entire engine without ever taking it out of the vehicle.”

After months of driving home from ITM every weekend to rehab his Skoolie, he’s nearly finished with the RV conversion. With furniture, kitchen sink, bed, closets and more installed before Christmas, he had only some electrical and plumbing work left as he wrapped up his Fall co-op.

The student’s ingenuity was no surprise to the ITM team. The Milford, Ohio, engineering firm prides itself on landing co-ops who are problem solvers, then giving them real-world experience. In fact, CEO Tim Carlier believes deeply in giving students the same types of opportunities he received while in college.

While pursuing his mechanical engineering degree at Ohio University, Carlier worked summers and extended breaks at Manta Corp. in the early ’90s. At 19, he was scaling a roller coaster at Kings Island to instrument and test the ride overnight. It was extremely valuable experience, and he wants to pass it along to the next generation.

That’s why co-ops at ITM find themselves traveling the country on assignment, helping with research projects in the R&D lab or even scaling a massive recovery boiler to help the firm monitor and improve efficiencies in a pulp and paper plant.

For Weston, two co-ops at ITM gave him the opportunity of a lifetime.

“I was at the office getting acclimated and learning how to install strain gauges when they said, ‘Well, we have a contract with NASA down in Alabama , and we’d like to send you down there,’” he said. “I mean you can’t really ask for much more than that being a first-year aerospace engineering student. That was a really cool experience.”

In addition, he liked working at a firm where the company leaders are so accessible.

“I don’t think you would be able to say in most jobs as a student that you see the CEO every day and you talk with him and go out to lunch.”

For more information about co-op or other employment opportunities at ITM contact Josh Fishback at (844) 837-8797.

I’m excited to announce that our team is growing with the addition of Zach Strong.  After graduating in May of 2020, Zach recently moved from Co-Op to a full-time engineering technician position. Zach’s primary role as an engineering technician is to assist with industrial monitoring solution installations and field testing applications. In addition to his work in the field, Zach works in our instrumentation lab assembling and testing custom control panel assemblies, installing strain gauges on customer components, and building and testing customer monitoring and measurement systems.

We welcome Zach to our team.  You can read more about our entire team here. 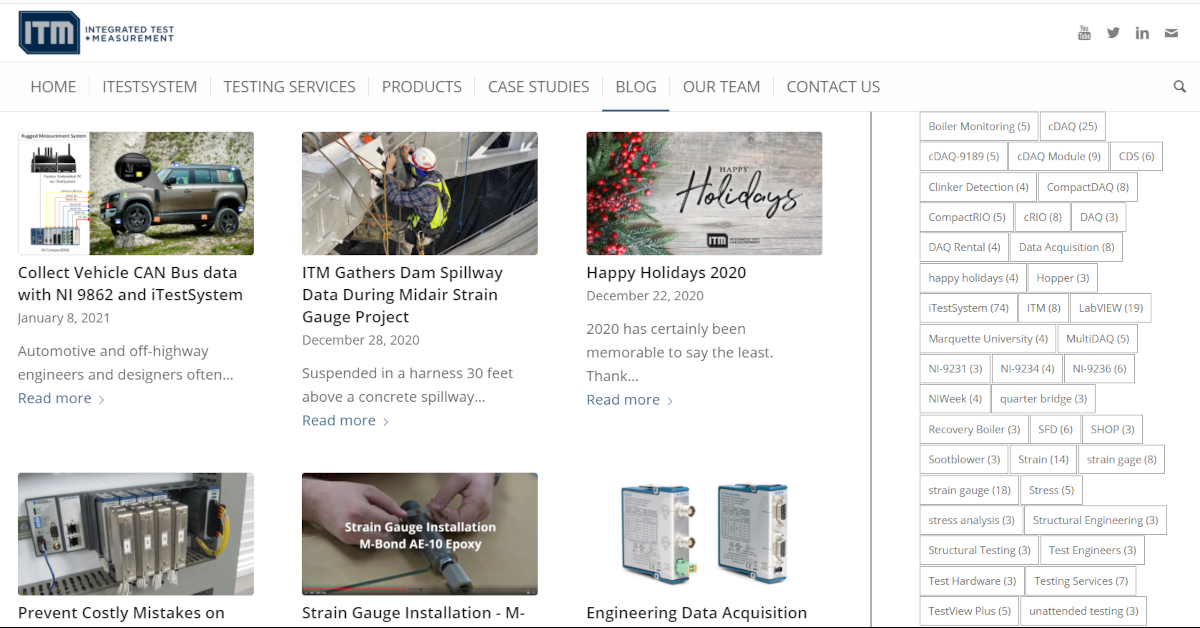 Far too often in our field, we engineers get so completely focused on the technical side of our trade that we lose site of good communication and modern presentation.

As an engineering firm, ITM has been working toward taking our communication strategy beyond simply marketing our technical services. We see the importance of presenting our firm by telling our story and sharing real-world ways in which we solve engineering challenges.

That is the reason for this blog, and it is also a big part of why we redesigned our website last year at itestsystem.com.

On our site you will find plenty of products and services, but you will also find many case studies and blog posts that we hope will share not just what we can do, but also how we accomplish complex engineering tests and why we choose certain methods.

We believe these things work to deepen our relationship with our clients and even spur new ideas. But more than anything, it helps tell our story.

Speaking of improving communication, please update your email contacts for ITM. As of Feb. 1, 2015, we will be changing our e-mail addresses from @unyah.com to @iTestSystem.com.

I look forward to sharing more about ITM’s story with you.